I grew up way back in the 1950s and 1960s before the days of “Time Outs.”  I think I would have loved time out.  My parents had five wild kids.  They were partial to the time-   honored switch and belt system.  If Mother wasn’t too serious about the point she was making, she was fairly likely to pull the plastic fly swat off the nail by the stove and give us a couple of swats with it.  I always felt ridiculous getting swatted by Mother, anyway.  She is a tiny woman with a squeaky little voice.  If she got mad enough to holler or swat, she looked and sounded a lot like Minnie Mouse.  It was kind of embarrassing, but didn’t hurt.  She kept a switch on top of the refrigerator for true emergencies, but more often than not, it disappeared.  More than once she tried to use it and found it broken into dozens of connected sections, like a segmented worm.  She did have one annoying habit though.  She kept a switch on the dashboard on the car with which she threatened to lash backseat brawlers.  I think she tried to swing it at us once and almost ran off the road.  I never felt Mother was unjust.

Now Daddy’s method was a different matter entirely.  It was swift, terrible, and unpredictable.  I can still remember the seven pops his belt made as it came flying out of his seven belt loops.  Sometimes he allowed us the honor of choosing our sown switch.  If your choice didn’t meet his expectations and he had to fetch one, you could count on something terrible.  One of Daddy’s favorite tactics was to promise a whipping, then hardly speak to me for several days before delivering.  I could always tell D-day, because he’d always come in from work in an upbeat mood.  First, I’d get about a twenty minute lecture(no exaggeration) telling me how badly I’d disappointed him and now I had to be punished.  He promised me a whipping.  He had to follow through on a whipping, just as much as if he’d promised me something good.  Long before we got to the whipping, I’d be bawling in anticipation.  Finally, he’d pull off his belt or send me for a switch and the fun began in earnest.  He hold my arm and whip me a dozen times or so, leaving long stripes that took days to fade.   I felt so much shame and humiliation at being the type of kid “who had to be beaten.”  It felt invasive and soul-destroying.  I know there was nothing of justice, discipline,  or concern in those beatings.  It was just anger.

31 thoughts on “Instrument of Torture” 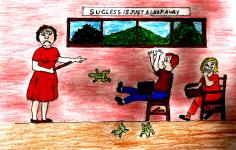