The baby was tiny. I hadn’t seen anything but tonsils, poop, and Sesame Street in three weeks. My three-year-old-jabbered non-stop. My ears were sore. Naturally, with the clear-thinking of a woman with near terminal post-partum depression, I took full responsibility everything that went wrong. I don’t know if my husband was a good father or not, since he was rarely home. Just days just before the baby came, he’d been lucky enough to land a job where he worked six days on, three days off. We were ecstatic! For the first time since we got married, we were rich! Miraculously, we didn’t have to worry about getting the utilities cut off each month. There was no way either of us was about to complain about the demands of his job as long as he could stagger to work.

This time out, Bud been gone two days. The baby cried incessantly, with the exception of frequent poop breaks. Of course, I used cloth diapers. This was nearly forty years ago. My son was happy as a clam, jabbering merrily behind me every step I took. All was going well till I foolishly left a poopy diaper to soak in the toilet. Of course, I knew that might happen.  Bud had pointed it out to me repeatedly when he left me to do all the rinsing!Naturally, my son, who had great interest in the toilet flushing, not toilet training,  flushed it. The toilet plugged. Our budget had only recently stretched to include regular utility payments. There was no way it would include a plumber. I could look forward telling Bud what had happened when he got back.  Thank goodness, I was able to hook it with an unraveled wire coat-hanger, saving the day.

Apparently, the Gods of Mayhem weren’t through with me yet! On the pre-rinse cycle, with the diapers still dirty, the washer threw a belt,  the first load of the morning. Still on a high from the joy of retrieving the diaper from the toilet, I thought. That’s not so bad, I can probably find enough change in a piggy bank to take a couple of loads to the laundromat. Bud gets paid in a couple of days. At least we have plenty of groceries, a roof over our heads, and all the bills are paid.

Pulling the sodden, stinking mess from the washer, I wrung them out enough to get them in a plastic basket, heaving the stinking, heavy wad into the trunk of my car, along with a load of my toddler son’s essentials. Even though I put them in a plastic laundry bag first, it leaked, leaving a malodorous, disgusting stream on my clean floors. I mopped the mess up with disinfectant, a pretty good job. It was as cold as it gets in Louisiana, probably in the low teens. I dressed the kids warmly and strapped them in the car, dreading the trip to the laundromat. I needn’t have worried. The car wouldn’t start! I tried two or three times, hoping for magic, since I’d been so blessed with the diaper in the toilet miracle. My luck was done for the day. I had also stunk up the trunk of the car for nothing.

I dragged the kids back in. By now, the baby was squawling and my son was disappointed. He’d been promised a treat! He hadn’t been out of the house in two days. I knew just how he felt! I got them settled. Brought the stinky diapers back in, did them in the bathtub, and cleaned up the floor again while they dried! Take it from me, diapers not spun in the washer take a long, long, long time to dry. So do toddler clothes.

Since my hard floors were freshly mopped and sweet-smelling, while the laundry was still drying, I reasoned it would be best to go ahead and vacuum the living-room and my bedroom, so the whole house would be clean at once! I could at least enjoy a clean house if I was stuck at home. Getting the vacuum out of the closet, I plugged it into an outlet in the living-room. Pop!! Sizzle!! Smoke and a sickening electrical smell arose as it snapped off. That was enough. I started boo-hooing then and there. Not to be outdone, both children joined in. We shared quality family time.

Finally, things settled down. I got the kids to bed. I didn’t fight the nightly battle to get my son to sleep in his own bed. I’d had enough! The baby awoke, crying for a bottle around midnight. I got up to feed her and felt a stabbing pain in my side. Oh darn it! I must have pulled a muscle! Maybe it wouldn’t get too sore. My son padded in behind me to help as I fed her, jabbering non-stop and dragging his bunny. I sent him back to bed. I settled her and got back to bed. Later, I woke up sweltering and sweating. I felt like I was in a sweatbox and had difficulty getting a breath! I tried to sit straight up and felt an excruciating pain in my back. Was I dying alone here in the house with two helpless children? Bud wouldn’t be back for three more days! They could die, too. I had to try to save them! Only the courage of a dying mother explains what happens next. I forced myself to breathe slowly and deeply, rolling on my side. The pain was agonizing, but for the sake of my children, I pushed on. By now, I was on my stomach, slipping on my knees on the floor. I breathed shallowly through my pain, drawing in a little each time, making an effort to fill my lungs for maximum strength, not knowing what would happen when I tried to stand. My face was burning! The baby was three-weeks old. Did I have some kind of late-developing child-bed fever? As I marshalled my strength to reach for the bed-side phone, it rang. Had Bud somehow psychically sensed my distress and called home to check on us? Gratefully, I croaked, “Thank God you called!”

It took the caller a moment to recover from the warm reception. “I’m beatin’ my meat!”

“What?” I wasn’t prepared for this, as I was expecting salvation.

I hung up.  The diversion did get my mind off my troubles for a moment, as I remembered the agony was a pulled muscle. My son woke up and said, “Mommy, I’m hot!” Surely he didn’t have child-bed fever, too! Making my way down the hall to check the thermostat, I found his bunny hanging where he’d given the control a push before heading back to bed. That explained my fever. Some aspirin and a few miserable days took care of the pulled muscle. A new car battery and washer belt fixed things right up when Bud got back in three days later. The vacuum was toast. I had plenty to tell Bud when he asked, “What went on while I was gone?” 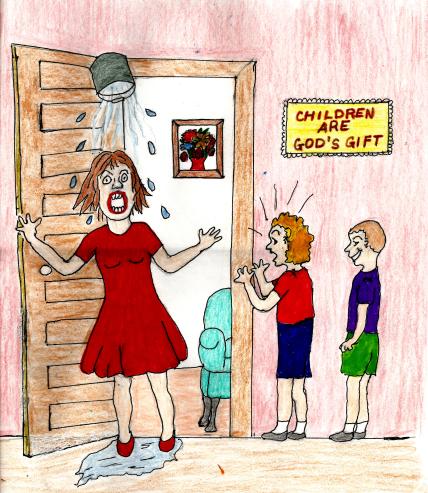 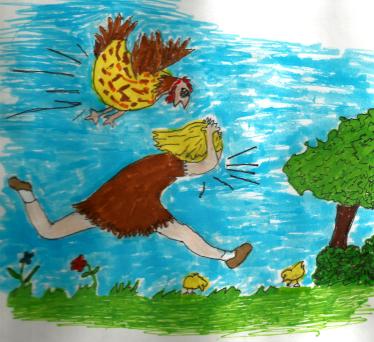 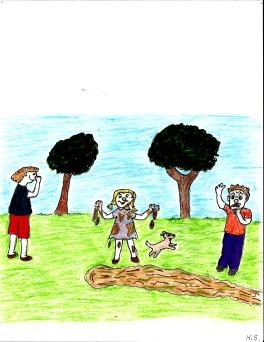