My brother Billy and I decided to go to Mr. Charley’s funeral together.  I should have known better.  He always gets me in trouble.  We grew up playing with Mr. Charley’s kids, in and out of their house a lot.  He was a good guy.  I certainly didn’t decide to go to his funeral just to make a total ass of myself.  That was Billy’s doing.

On the ride out, Billy told me about “a friend” of his who had embarrassed himself in the drive-through line of a hamburger joint earlier that week.  The “friend” had gotten stuck in line, right next to the speaker.  He called out several times.  No one answered.  He was wedged in.  .  It was hot.  He couldn’t order, go backward or forward, so he did the only reasonable thing.  He cursed loudly about waiting in the heat, abusing the reputation of the restaurant, the employees, and hamburgers in general, pounding his steering wheel to make a point!

After a bit of this infantile behavior, the speaker clicked on.  “May I take your order, please?”  Relieved, he gave his order and pulled up.  When he got to the window, he found a sea of faces waiting to see the idiot they’d heard throwing the fit.  The speaker had been on the whole time.

He finished his story just as we squeaked into the churchyard.  We filed in with the mourners, taking a seat.  As the services started, it was pretty warm.  Before long, it was hot as blazes. Obviously the air conditioner was on the blink.  Billy grinned and whispered to me, “It’s hot.”  Remembering his ‘friend’, I stifled a giggle.  As the eulogy continued and the mourners sniffled, I struggled to maintain my composure, not daring to look at him.  We were both shaking silently, as though overcome by grief.  The blazing heat miraculously unstopped my sinuses.  I tried to stop a cascade from my nose at the same time I was overcome by hysterical laughter.  I was grabbing, unsuccessfully at snot, trying to get it back up my nose discreetly while trying to look like I was crying, not laughing.  I might have made it if Bozo the Clown beside me hadn’t been guffawing beside me.  We both left without trying to console the family further.  I figured we’d done enough.

19 thoughts on “Making an Ass of Myself at a Funeral” 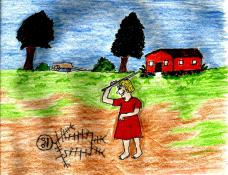 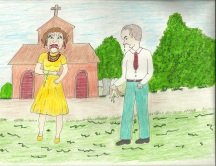 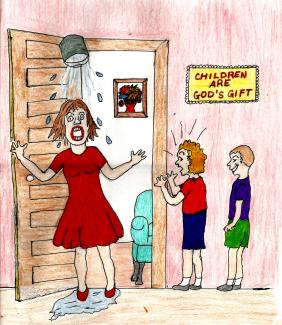