My brother just called to remind me of his troubles with our cousin Larry, the bane of his existence. Larry was probably the only reason I had to be glad I wasn’t a boy when I was a kid. Thanks for that, Larry. Larry was fifteen months younger than me, falling right between me and Bill in age. Back then, our families had lots of overnight visits. Poor Bill was stuck sleeping with our cousins Larry and Tory, both power bedwetters. Though it was remarkable that Bill hadn’t wet the bed since he was a baby, when Larry and Tory visited, they both arose in the morning accusing him of drenching them. He still recounts the horrible sensation of sleeping between them, feeling that initial warm, then slightly stinging feeling that quickly cooled to the shock of awakening in a puddle. It must have been awful for kids who wet the bed to have to sleep over in the days before protective pants. Thank goodness for the advances that saves kids’ precious dignity and pride today.

However, Bill’s major complaints weren’t about the innocent concern of Larry’s bedwetting. He was a malicious kid, who reminded me of nothing more than a rat. First of all, no one wanted him around. Secondly, his personality revolved around his urinary habits. Not only did he wet the bed, he ran around with his pants unzipped so he could sneak up and pee on other kids. The fastest kid around, he normally escaped before we could catch and mutilate him. He didn’t seem to need friends, his social needs seemingly satisfied by his constant meanness. We used to joke that he would wind up on the Pea-Farm, the local penitententiary, which he certainly did.

One Christmas, Bill managed to slip into Mother’s walk-in closet and discover his major Christmas gift, a magnificient electronically controlled car. It was huge, probably more than two feet long. He’d turned on the light and was quietly playing with it in the closet when Mother sought him out and caught him in the act. She played out her big guilt act, “I hope you enjoyed yourself, because you’ve just ruined my Christmas. I am taking that car back tomorrow!”

Of course, Bill was just sick with guilt and loss, like he was supposed to be. On Christmas day, he was overjoyed to find the wonderful toy sitting under the tree, after all. Since Christmas fell on a Sunday that year, the kids couldn’t miss church that day of all days. He didn’t get to play with it then, just admired it and put it away till after church. Mother stayed home to get Christmas dinner going. Daddy stayed to make sure she did it right. The invading hoard of relatives descended before we got back. Though we had carefully locked all our loot away, the evil Larry had gotten a hair pin and picked the lock on Bill’s door. He found his precious car apparently just as he’d left it, except, when he tried to run it, nothing happened. When he turned it over, all the wires had been snatched loose from their connections. The only time he’d gotten to play with it were those few guilt ridden minutes in the closet.

More about the evil Larry later. There’s far too much to end it here. 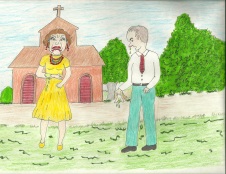 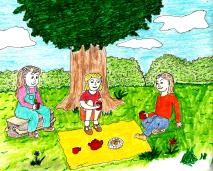 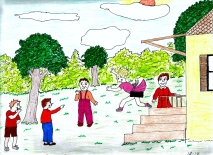