One warm afternoon in late May, 1960, Billy and I were lying on the living room floor as Mother reclined a few minutes with her feet up wearing the heavy surgical weight stockings the doctor had ordered. She was six months into a difficult pregnancy with her last child,and was supposed to be off her feet. She had spent a good portion of the morning tying to keep an eye on her fourteen-month-old, Connie, while trying to coax twelve-year old Phyllis and me at ten to do a little housework, help with Connie, and even get a little work out of seven year old Billy, while keeping him out of trouble. Phyllis was watching Connie. We were all terminally lazy, slacking off at the first excuse. None of us had any intention of doing anything we could avoid.

As we dawdled at her feet on the floor in the draft of the attic fan, one of us pulled out an old photo album. I quickly found a picture of her made her senior year of high school, the peak of her youth and beauty. “I graduated thirteen years ago today,” she remarked smilingly.

In my infinite wisdom, I proclaimed, “Oh Mother, you used to be beautiful!”

I turned for her smile, only to see a snarling, slobbering, swollen beast ready to pounce on me in rage! “”Used to be beautiful! Let’s see what you look like when you have five kids in twelve years! Put this stuff up, right now. Linda, you take your smart mouth and get those dishes washed. Phyllis, you put a pot of beans on for supper. Billy, you…”

By the way, this is not the picture in question. That one mysteriously disappeared

56 thoughts on “You Used to Be Beautiful!” 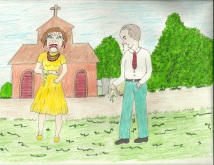 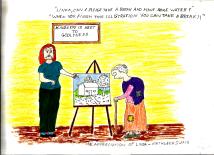