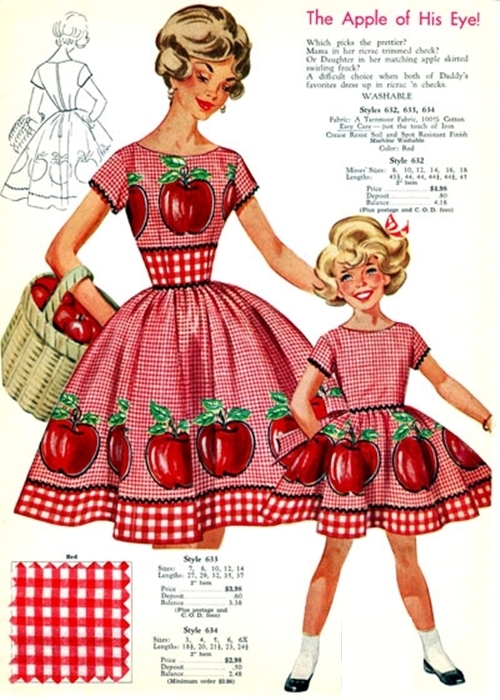 One of my favorite eavesdropping episodes was about a friend of Miss Laura Mae’s whose husband was in prison and daughter in the orphanage.

“I got a letter from my friend Alice Marshall today. Her husband has been out of jail a long time now and her daughter Helen just had her fifth. Just look at this picture she sent me of Helen’s family. She is so proud.” she said, passing a picture to Mother.

I wanted to see that picture so badly I forgot I wasn’t supposed to be listening in. “Let me see! Let me see!” A daddy, a mother holding a baby, three little girls, and a small boy stood in front of a car. The woman and little girls had on matching dresses. The man and boy looked neat in dark pants and plaid shirts. “Their dresses are all alike! How did they get dresses alike?” I had to know.

“Helen can sew real good. She makes everything her and the girls wear. Ain’t that something?”

I had to agree. “Mother, can you make dresses alike for me and you and Phyllis?” It seemed like a small thing to me.

“I don’t know,” Mother said. “That would cost a lot of money. I don’t have patterns for matching dresses, and I sure don’t have that much material.”

“Stop that whining! Go play in the yard. You’re not supposed to be in here listening to grown people talking, anyway.”

I gave up and sat on the back step, feeling sorry for myself as Miss Laura Mae went on with her story. “I know Alice couldn’t see nothing but hard times when Martin got sent to prison. It was back in The Depression. He stole a hog ‘cause they was hungry an’ got five years in Angola. Alice moved back in with her mama in Baton Rouge, but it wasn’t long before her mama died leavin’ her nowhere to go. She got a job in a hotel restaurant washing dishes and got a meal with her shift. She rented a room in a boardin’ house, but didn’t make enough to feed Helen. She had to put the poor little thing in a church home. Poor child had to stay there four years. Alice went to see her ever’ Sunday, and kept tellin’ her they was all gonna be together agin. I didn’t see how they ever would, but Martin finally got out of jail. He was able to git a job at a sawmill and after a month or so, they got enough together to git a place an’ get Helen home. You never saw anybody so proud as Alice an’ Martin. I was real proud for ‘em. They had a couple of boys after than an’ done real good, but Alice always felt bad for puttin’ Helen in that home, but pore thing, she couldn’t even feed herself. Don’t you know Martin felt awful fer puttin’ ‘em both in that spot. He was a good man and never did git in no more trouble. I don’t believe he ever would’a stole that hog if he had’na been tryin’ to feed his family, anyhow. Them was some hard times, real hard times.” 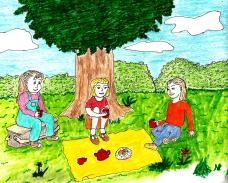