Despite my parents’ earnest efforts, I never developed a taste for church. Church required dressing in starchy clothes, a miserable Saturday night hairdo session, major shoe polishing efforts, memorization of Bible verses, claiming to read my Sunday School lesson, and worst of all, not getting to spend the night with my heathenish cousins who didn’t have church inflicted on them.

It probably wouldn’t have been such an issue had my older sister not been the poster child for Christian kids. She could be mean as a snake all week, then nearly kill herself to be in church every time the doors opened. In all fairness, it is possible her meanness toward me was a result of torments I’d heaped on her, but if she was such a great Christian, you’d expect her to be thankful for the opportunity to turn the other cheek, like the Good Book says.

Any way, the summer after my junior year in high school, Mother came home from Sunday School with “Big News!” Mrs. Miner had asked Mother if I would take the primary class in Bible School. Mother assured her I would LOVE to, forgetting I wasn’t cut from the same cloth as my saintly sister. “Why, it was an honor to be asked,” Mother told me. “No one else your age was even asked.  Naturally Phyllis was also honored with an invitation to teach the juniors.  She was so excited you’d have thought the invitation was straight from God’s lips.

“I will not teach Bible School. I hate bratty kids and crafts, and I am going to enjoy the first year of my life not stuck in Bible School half a day.” I told Mother. This defiance came as a big surprise to her, since I normally went along with her. Daddy was so strict, that by the time I was that age, I’d pretty much given up on getting my way about much of anything, but this Bible School business was over the line. I’d had enough!

“Oh, yes you are,”. She insisted.” I’ve already told Mrs. Miner you would. Besides, she can’t get anyone else to take that class.”

“Mother, I hate Bible School. I won’t do it even if you beat me to death, and then I’d go to Hell for sure, getting killed over not teaching Bible School. Do you WANT me to go to Hell?”

Pulling out the Hell card was all that saved me. Mother considered and backed down. She’d made it clear on many occasions she had no intention of allowing any of her children to go to Hell.

Well, I didn’t teach Bible School and I didn’t have to go to Hell, but I got the next worse punishment. Mother gave up and taught “my class” but threatened me I’d better have the house spotless and lunch ready every day when she got in from Bible School. She was mad as hops for having to teach, which seemed odd when it was such an “honor” to be asked. Oh yes, I checked with my friends, all good Christians, and Mrs. Miner had unsuccessfully badgered them to take the class before she bothered cornering Mother about me. I guess they didn’t know what an honor it was.

That Monday morning the house was a real pigsty. Mother never was a meticulous housekeeper, but we’d had swarms of relatives in. Sunday evening supper was late, so the dishes waited for me in cold, slimy gray water ensuring they’d be as disgusting as possible for me.  I was always involved in housework, but this was the first time I was threatened with a job of this magnitude to accomplish alone in less than four hours.

Mother took pleasure in calling out over her shoulder as she headed off to Bible School. “This house better be spotless and lunch on the table when I get home…..and Oh, yes, clean out that refrigerator, too!”  The saintly Phyllis smirked as they got in the car.

I didn’t bother to tell her that she, Phyllis, and I couldn’t have gotten all that done if we’d been working like like our lives depended on it. It looked like a week’s mess piled up. I started in on the dishes, a Herculean challenge. All the countertops were covered, the stove, and a pressure cooker and several dirty pots waited patiently on the floor for their turn. Grandma apparently thought more pots was the answer to all Mother’s problems, so every time she went near a thrift store or replaced one of her pots, she sent her castoffs to Mother. Mother was a master of disorganization and grabbed a fresh pot for everything she cooked, tossing the used one on the dirty stack. A stack of crazily leaning miss-matched pots and lids always lined our counters, unless we’d just done the dishes.

I set in washing. The glasses, plates, and bowls went pretty fast. There were way, way more than the rack would hold, so of course, I had to stop to dry and put away several times. The dreaded silverware was next. I made fresh, hot dishwater to soak it during the drying and put away process. While they soaked, I tackled the refrigerator. It was a small, older model with few shelves. Never fear, those shelves were stacked two or three layers deep with ancient vegetables nobody wanted the first time, dried mashed potatoes, wizened onions, potatoes, and turnips with dirt still clinging from the garden. None of our bowls had lids, so leftovers quickly crusted over.  I scraped out the dried leftovers in a bucket for the hogs, and made a new stack to start after the silverware was done.

We didn’t have air conditioning, but our house boasted an attic fan.  For best effect, one closes the doors to unused rooms so the fan will pull a breeze though the areas in use.  I had the kitchen windows and back door open.  By the time I got the silverware done, a few wayward flies had worked their way in through a hole in the back door screen, not bothered at all by the cotton ball on the screen  that was supposed to terrify them senseless.  They didn’t share the family’s low opinion of the leftovers and were buzzing about them happily.  I took time out of my busy schedule to treat the hogs to that bucket of slop.  It’s impossible to climb up on the rails of a hog pen and dump slop into a trough with splashing some on yourself.  This just added to the fun.  A number of the flies journeyed with me to the hog pen, but a few slow learners lingered in the kitchen.  They were all over the slop I’d splashed on myself as soon as I got back in.  I didn’t have time for a showere, so I washed  my feet and legs with a washcloth.  The flies found a few spots I missed and pointed them out.  Of course, I had to swat them and sweep them up with the rest of the kitchen before I could continue.

About eleven-thirty, I realized it was way past time  to get lunch going.  We weren’t baloney and cheese sandwiches kind of people  We were big meal in the middle of the day people, a meat, dry beans, and two vegetables and biscuits or cornbread.  I couldn’t have made a quick lunch if my life depended on it.

In a panic, I perused the refrigerator and found nothing but a couple of eggs and a package of frozen sausage in the freezer.  Desperately, I scrambled the sausage and made a pan of sausage gravy and biscuits.  We often had biscuits and gravy for an emergency meal.  Just as I pulled the biscuits out of the oven, I put away the last dish away and finished mopping the kitchen as they got out of the car.  The rest of the house was untouched, but the kitchen sparkled.  “Don’t come in the kitchen.  The floor is wet!”

Even though the rest of the house still looked like a disaster zone, the kitchen looked good.  Mother looked self-righteous, but somewhat mollified till she asked what was for lunch.

“Sausage gravy and biscuits.  I forgot to put a chicken out to thaw and put beans on.”

Mother was furious.  It was summer.  I guess she’d thought I would somehow found time to gather and prepare okra and tomatoes from the garden like she would have if she’d been home.  “I can’t eat biscuits and gravy!  I am on a diet.  I have to have vegetables or I’ll put all that weight back on!”  In a huff, she went out and got tomatoes and radishes, and ate them with two fried eggs.

It still beat the Hell out of teaching Bible School,

34 thoughts on “My Brief Career as a Religious Educator” 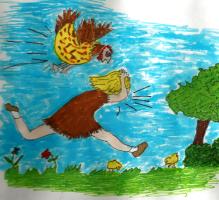 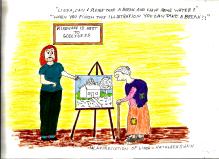 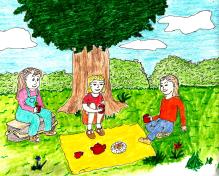 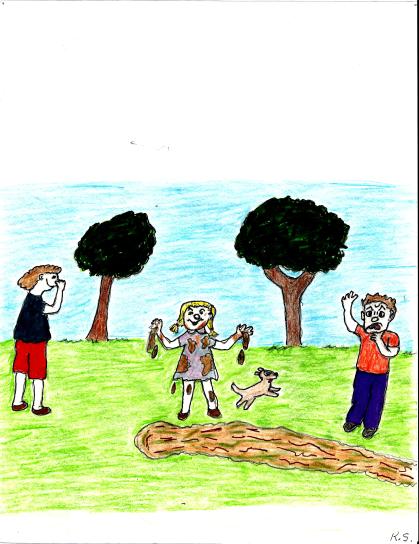 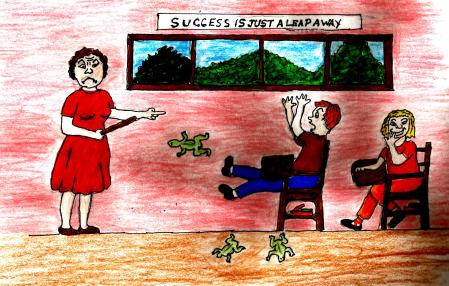