For the first time in weeks, Anya slept deeply under the willows without fear of her captor.  In the fickle manner of West Texas, as the temperate day drew to a close, a cold wind swept in clouds from the North. She roused shivering as the rain peppered her with sleet. Knowing she’d die if she just lay there, she managed to rake a bed of leaves and burrowed in, somehow surviving the bitter night.  At first light, she emerged, battered but choosing life.  The day warmed as though there had been no icy storm in the night.

Despite the beating she’d endured, she walked through the hours, often falling, then struggling back to her feet in search of help.  Eventually, she stumbled upon a milk cow grazing in the distance.  Laboriously, she made her way toward It, hoping it wouldn’t wander off.  She stroked the gentle beast, before dropping to her knees, grasping an udder, and squirting warm milk into her mouth.  Strengthened by the cow’s life-saving gift, she leaned against the kind beast, comforted by its warmth..  Anya kept pace with the cow, occasionally milking her or resting while the the beast grazed.Thankfully, the cow didn’t object to her company.

As the afternoon shadows lengthened, the cow seemed charged with purpose and picked up her pace.  Anya took hold of her rope halter to keep up.  As they climbed over a rise, a homestead came into view.  Anya released the cow and she picked up the pace, trotting with purpose as her bag with its engorged udders swung side to side. 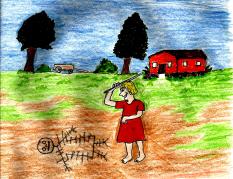 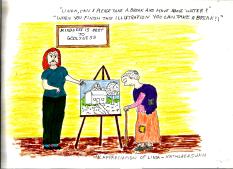