Molly felt a change in the air when she went into the post with Aggie with trade goods.  A pretty woman attracted a lot of attention where men vastly outnumbered women.  From time to time, a ship arrived bearing women convicts involuntarily indentured.  As often as not, they were offered marriage.  Should they go to a house without a wife and not be offered marriage, their future was unsure.  Rape was an ever present concern for a bondswoman with punishment for pregnancy out of wedlock a surety.  Molly felt the men looking at her differently, now Andrew was gone.  One or two who’d been eyeing her tried to buy her bond from Wharton, though thankfully, so far he’d declined.  Molly knew with the spring work looming ahead, he’d have to engage help.  She kept as close to home as possible, hoping not to attract attention.

In her grief, she wasn’t thriving, going about her tasks by rote.  Aggie treated her much more warmly, initiating conversations and sharing tales of her girlhood, courtship and early marriage.  Without her to take her mind off her troubles, Molly had little else to think of except her fear and grief.

After a few weeks, Molly’s fears eased a bit when Master Wharton made no move to change their situation.  She worked hard, trying to make his home comfortable and Aggie made sure she knew just how he liked his favorite dishes and how he liked things done.  When her appetite returned, she thought it was because she took pride in her cooking.  When she started throwing up and her breasts got tender she feared it was something else.  Molly had confided to a friend at chapel, she was sleeping in the barn again to guard against the appearance of evil.  While Bartles and Aggie were glad she was protecting her reputation, they were fearful her confidence might attract unwelcome company.  Master Wharton insisted she keep the door barred and Jackie at her side when she was abed.  Between them, Wharton and Bartles resolved to keep her safe.  Sure enough, it wasn’t long before Jackie woke her lunging at the door and barking.  Master Wharton fired shots at a man fleeing in the woods.

Aggie noted Molly going about her labors with her collar button opened when she came over with some baking.  “Why is your collar button undone?  It’s a cool morning?  When I was in the family way, the first thing I noticed was a tight collar button.  How long since you had your courses?”

Molly stammered.  “I’m not sure.  I think it was a week or so before Andrew was lost.”

“I thought you had the look of breeding.  Have you been sick in the mornings?”  Aggie went on.  “Do you have cravings?  How long since you had your tea every day?”

Molly looked devastated.  “I never thought of it since the trouble, till I got sick in the mornings and my breasts felt tender, but Aggie, I can’t give this child up, no matter what.  It’s the last of Andrew.  What if he comes back?  I know I could punished for breeding, but there has to be a way.  Anyone can count back and know when this babe was conceived.  It would be too cruel to take it from me when I’ve nothing else.  What am I going to do?  Is there any way you and Bartles could buy my bond?  I’ll work for you as long as you ask me to if you’ll just help me save my baby!”

“Oh Molly, we have just a few coins after equipping our cabin.  It’s not possible for us to buy a bushel of corn, much less your contract.  Of course, you and the child could stay with us, but the master has already lost two bondsman.  It’s doubtful he could give you your freedom, even if you stayed with us.  We’ll have to talk to Bartles about all this.  It puts you in a terrible place.  A woman in the family way with no man is in terrible danger in this place.” 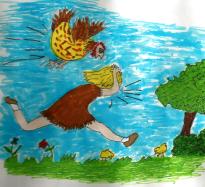