Our first photo together.  I am the chubby baby in the front row.  Bud is behind me to my left.

Bud and I celebrate our forty-eighth anniversary today.  We met days after my birth when his mother came to help out after my birth.  Two and a half years old and more experienced, he wisely waited for me to grow up a little before showing interest in me.  I was pre-occupied with the business of being a baby and had no time for him, possibly leading him to think I was playing hard to get.  From time to time, we’d be thrown together over the years, at holidays, school events, community, church, and family visits.  He was pleasant to me.  I liked him, but had no idea he held a special interest in me.  The summer I was seventeen, he’d gotten a car and starting calling regularly.  My sister Phyllis thought he liked her, so I made a point of getting out of their way when he came to visit.  All socializing was done in the living room in the midst of a large boisterous family with the TV at full blast, so there was no question of privacy.  We could take a guest to the snack bar in the dining room if we wanted, but we were still in the middle of things.  Coincidentally, my fourteen-year-old brother, Bill, really admired and enjoyed Bud, too, so he thought he was there to see him.

Bud was had broken his foot and bashed his thumb in separate accidents in his summer mechanic job, so he was a comical site hobbling on crutches with casts on his foot and hand.  He was good-matured about all the teasing, so I knew he had to be a good guy.

After a week or so of nightly visits to Phyllis and Bill, I was surprised to get a call from Bud, asking me out.  I probably stammered a bit, since I thought he was interested in Phyllis.  I accepted, and that was it.  We were married two years later.  Forty-eight years and two children later, August 22, 2018, we celebrate our  anniversary together.  We’ve had the best life anyone could ever have. 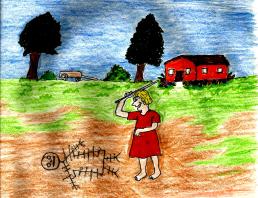