Most nurses have to work half the holidays.  It’s a fact of life.  That means, you’re also working with a lot less help on those days, not always the best situation.  Patients need the same care as any other day. Since Bud and I were both nurses, we just planned our celebrations around the holiday, not a bad idea, anyway, since our many siblings had other family to visit.   One Thanksgiving, I was the only nurse working in the hemodialysis unit, assisted by a technician.  I made sure my patients knew when they were scheduled, so their family could have an uninterrupted visit, hoping not to cut a family visit short.  It’s a bad idea for a patient to eat a heavy meal before a dialysis treatment, so I always encouraged them to have no more than a light snack, to avoid a vomiting episode.  Patients who eat a large meal are very likely to throw up during their treatment.

The patient I had scheduled for one o’clock just couldn’t resist the delectable Thanksgiving Dinner his family had brought from home.  He had turkey, dressing, green beans, and pecan pie.  After a preliminary conversation and pretreatment assessment, I asked if he’d had a snack before coming.  “Oh yeah, I had a little bite of turkey.”

I got his treatment started and all was well for a few minutes, then the truth came out about his hearty lunch, literally.  He started heaving.  The whole menu was presented, dessert first, since it was on top.  Pecan pie is not appealing the second time around.  Turkey and dressing came up next, followed up by green beans.  He filled his own lap and the blanket covering him, with plenty to spare.  As I cleaned him up and got him into a fresh gown, he served up seconds.  This time it was turkey,  green beans with a few bits of egg.  Fortunately for him, I caught most of it in a towel.  The rest splattered me. He felt much better with his stomach empty and went right to sleep.

I always had extra scrubs in my locker for just such an occasion. While the technician watched the patient, I ducked into the staff bathroom.  I peeled the disgusting clothes off, trying to avoid getting the mess on myself.  I scrubbed myself, but didn’t have a fresh bra.  I swabbed the drenched one the best I could with a washcloth, and put on fresh scrubs over my bra.   I knew I smelled sour, but there was nothing else to be done.

We finished his treatment, uneventfully.  Hours later I got home.  The kids told me I stunk.  The dog agreed.  He couldn’t leave me alone, burning to investigate the intriguing aroma. I couldn’t wait to shower. When I peeled off my bra, turkey and green beans tumbled out.  They’d left an imprint.  Bud was repulsed.  The dog was entranced, gobbling them right up.

“Doctor, doctor, will I be able to play the violin after the operation?”
“Yes, of course…”
“Great! I never could before!”

A man speaks frantically into the phone, “My wife is pregnant, and her contractions are five minutes apart!”
“Calm down.  Is this her first child?” the doctor queries.
“No, you idiot!” the man shouts. “This is her husband!”

I am normally up between four and five.  I’d love to sleep later, but my eyes spring open like a cheap window shade .  I am desperate to be out of bed.  Yesterday morning, for some reason, I dozed back off. The crazy dreams started.  It was miserable.  I dreamed I was supposed to be at a mail-carrier job ninety miles away.  Every effort to get there fell through.  First, II couldn’t find black pants I had to wear.  Next, I had dawdled and not gotten ready.  I kept struggling, but one impediment after another held me back. It was misery, like trying to push syrup up a hill with a stick.  I was so glad to finally wake up.  This morning, I jumped straight up.  It was so much better. 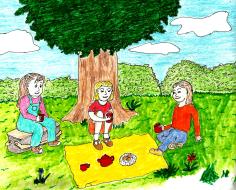 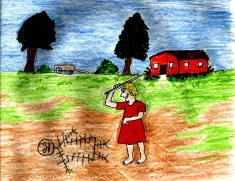