Aunt Jewel had several nieces and nephews I saw from time to time.  Her sister Lucille, of the hairy legs, who was married to Daddy’s Uncle Dunc, had three daughters, Alma, Eunice, and Gladys.  I guessed Lucille wanted to keep to her family’s tradition of inflicting horrible names on kids including her boys,  Hambone, Mookie, Teeter, and twins Fats and Snake.  I can’t imagine how she settled on Fats for one of the twins.  They both were skinny as snakes, though neither bit me.

I was most impressed with Alma.  Mother said she was a tramp because she wore her swimsuit and moved the grass when a road crew was working in front of their house.  It made no sense to me.  I thought she looked beautiful with her bright red lipstick, blonde ponytail tied with a scarf, teetering along in high heeled wedge sandals.  The mower gave her a lot of trouble and a couple of the guys came to check on her.  Her sister Eunice came out in her swimsuit, but she was not so popular, probably because she was extremely thin.  Her suit bagged over her hips like a toddler’s training pants.  Alma got a boyfriend that day.  Eunice didn’t.  No matter, Eunice had somehow snagged a boyfriend named Moxy.  I think he followed her home from her carhop job.  Mother also thought carhops were trashy, dashing my career hopes.  I was impressed when Eunice got married at the age of sixteen and had a baby shortly thereafter. Eunice and Moxy were great favorites of Aunt Jewel’s, so I heard of them from time to time over the next few years.

Gladys was nearest me in age.  Apparently still under the influence of her religious, fundamentalist mother, her clothes inspired no envy in me.  Her hair was tightly braided.  She wore a dark, long-sleeved dress and brown leather oxfords I did not envy.  Her mother kept her busy, leaving her little time to play with me.  I helped her wash dishes and mop the kitchen so we could escape outdoors.  That afternoon, we waded in their pond in our clothes.  Gladys said her mama didn’t allow her to wear a swimsuit.  Afterward, I  wore one of her Pentecostal dress and flour sack bloomers while my clothes dried on the barbed wire garden fence.  I wanted to keep the flour sack bloomers, but mother insisted I give them back.  I never wore anything more comfortable.   We each got a quarter of watermelon from their garden that had been cooled in their well. Late in the day, the men fried fish while we chased fireflies in the dusk.

Uncle Dunc, became progressively rowdier as the evening drew on.    Though I didn’t know it at the time, It was my first experience with a drunk.  Uncle Dunc began playing wildly with us, chasing us as we jumped off the high porch fronting their house into the darkness.   I enjoyed the day tremendously, though sadly, never got to visit again.  I lay that deprivation directly at Mother’s feet based on a conversation I heard as we drove home late in the night.  She took a dim view off drunks frying fish and chasing her children into the darkness.  What a pity!  I thought I was having fun.

I later got the impression he was named Dunc because it rhymed with drunk.  Still makes sense to me. 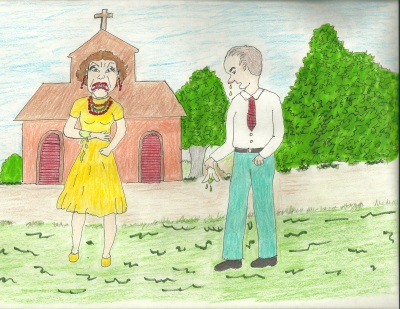 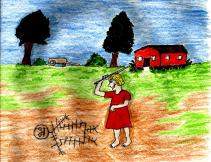