Tommy and Betsy lived just across from us when our son, John, was a baby.  Betsy and I had coffee a couple of mornings a week, and they’d been over for burgers a time or two.  Tommy and Betsy always brought beer, but we didn’t think much of it.   Their baby, Al, was a somber little guy who played quietly and never made a fuss.  I was amazed to see Betsy could easily put him down on a blanket on the floor and he’d nod straight off.  I babysat him a time or two while she ran an errand and hardly noticed he was there.  After napping, he’d sit on his blanket and play quietly.  When I put John down, he’d try to come over the crib rails, toss his toys or take them apart.  I’d have to check on him half a dozen times before he settled in.  Al was a total amazement to me.  He didn’t show a lot of personality, but he didn’t demand much.

Tommy and Betsy asked us to babysit while they went to a college football game. One Saturday evening.  They’d be in as soon as it was over.  Foolishly, we agreed, thinking we knew them pretty well.  Boy, were we in for a surprise.  Though Tommy and Betsy always brought beer to our barbecues, we didn’t intuit that they were gifted drinkers.  We put Little Al down to bed about eight, no problem.  Our baby was up to his usual hidings.  We expected Tommy and Betsy by eleven, then twelve, then one a.m.  They never showed.  Thankfully, Al didn’t care.  We went on to bed, wondering what in the world had happened.  Little Aaliyah woke up happy.  By ten o’clock, he was into John’s food, formula, and clothes.  I was beginning to wonder if they’d left the country when the hosts on the morning radio program launched into an amusing story about a drunken brawl at the football game the night before.  It seems  a tipsy woman thought another woman was flirting with her husband.  Wife A , the tipsy one, responded by moving over to sit in the lap of husband B.  Not surprisingly,  Wife B was offended and pulled Wife A out of her hubby’s lap.  Wife A, the drunk one, had a point to make, and slapped the offended wife.  Naturally, drunk husband A, came to the defense of his little tipper, grabbing the other man’s wife.  The fight was on.  The drunk couple was hauled to the slammer.

In the absence of Al’s parents, the story took on greater meaning.  That had to be Tommy and Betsy.  Eventually, the errant parents did show up to reclaim their son, probably after making bail.  They were battered, smelled rank, and their clothes hung in tatters.  Sure enough, they’d been the brawlers.  Fool me once, shame on you.  Fool me twice, shame on me. 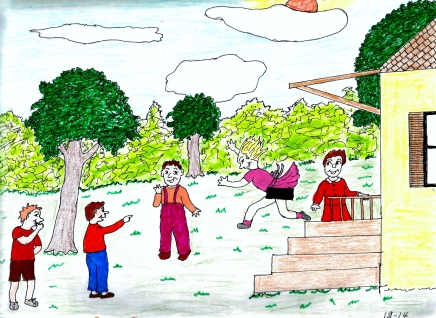 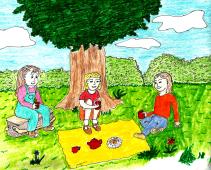