John and Buster on a Better Day

We’ve all seen articles by organized people enumerating methods to keep out lives well-organized, tidy, and rational.  Well, this is not one of those.  I’d be far more successful at writing “How to Mess Up Everything You Touch.”  My kids were always right ahead of me, making sure nothing was missed.  When John was three, I settled him on the floor on a big towel in front of the television with his breakfast on a tray to watch “Sesame Street.  Never a slacker in the appetite department, he always wanted milk, eggs, bacon, toast, and grits.  I always watched with him, ready to pick up his tray and cuddle him in his blanket after he finished eating. This worked well for months.

One sad day, I had to excuse myself for just a minute.  Naturally, I told John to sit tight till I got back.  Everything would have been fine, except the Buster the Dog wanted in.  No three-year-old could have resisted.  Buster surely thought he’d gone to Doggy Heaven when he found breakfast waiting for him, set right at puppy level.  Making quick work of my tidy layout, he spilled the milk, gobbled the eggs and bacon, and smeared the grits as far as they’d go.  In fact, it was so altogether satisfying and filling, he pooped his gratitude out on the carpet.  Sickened by the smell, John vomited on top of the whole mess. By the time I’d finished my business and got back to the living room, John was bawling at the top of his lungs and Buster was happily burrowed into the sofa, licking the jam off the toast.

I scraped up the worst of the mess and fixed John another breakfast, not because I thought he deserved it, but because it was the only way to assuage his loud and continuous grief.  Buster went back to the yard and I spent the next couple of hours catching up on some unplanned cleaning.

As a footnote, I noticed fruit flies buzzing around John’s toy box later that morning.  Digging deep, I found a rotten banana right at the bottom, but that’s a story for another day.  Just so you know, later that week I pulled a peanut butter and jelly sandwich out of the VCR.

For a while when I was a kid we had the Sailor Bill Show, a low budget afternoon kid’s show featuring Sailor Bill and his sidekick Polly Parrot.  Everyday Sailor Bill showed a couple of cartoons, interviewed some kids in the audience, talked to Polly Parrot, told a few jokes and made some effort to entertain us. END_OF_DOCUMENT_TOKEN_TO_BE_REPLACED 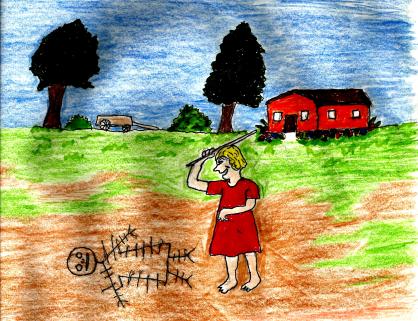 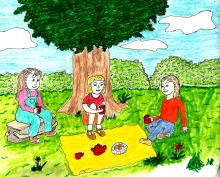