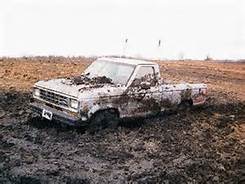 Aunt Essie got her nose out of joint when her little guys came home bringing tales of how badly Uncle Bill had treated them, so he didn’t hear from her till she fell on hard times a couple of years later. She had married her own fella named Bill by that time, strangely enough. This Bill was an affable enough guy, though he must not have taken time to meet the boys before they married. He’d also been married before and “wadn’ payin’ no child support to that whore of a woman after the way she done me. Besides that oldest ‘un never did look anthing like me, ner that little one neither, if you git right down to it.”

The long and short of it was, they needed to get the heck out of Dodge or her sweetie would have gone to jail. Like any landed gentleman of the South, Daddy had always maintained he’d provide a place for any of his sisters who fell on hard times. She magnanimously forgave Daddy. Over Mother’s furious objections, he set up a mobile home on their farm for Aunt Essie and her family. The situation went downhill fast. Aunt Essie wore her slippers to check the mail and slid down. She asked Daddy for the name of a good lawyer so she could sue. He told her she’d have to move if she sued him, so she changed her mind. Her Bill had a heart attack within a month of the time they moved there. He never worked another day, leaving them penniless until his social security kicked in. Guess who supported them.

All that aside, they had the added joy of daily life with Corwin. Corwin quickly dropped out of school, a reasonable decision, since the only thing he was getting out of it was a bus ride and two free meals a day. When he got suspended for harassing little girls, it was a relief to everyone in the system. Bill and Aunt Essie went somewhere in Aunt Essie’s car one day. Wisely, Bill took his keys, knowing Corwin would certainly take off in his truck the minute he left. One of Daddy’s horses had died three or four days before. As farmers do, instead of burying it, he hitched the dead horse to his tractor and dragged it as far to the back of his place as he could, leaving it to the varmints. Corwin had been puzzling over whether or not the varmints had gotten to the horse carcass yet. Corwin showed some industry in hot-wiring the pick-up, but not in driving in the muddy fields. He got stuck and had to leave the truck buried up to the hubs next to the bloated horse. Bill was livid when he came in and found his truck missing. “Where in the Hell is my G—D—- Truck?”

“Stuck in the mud on the back of Uncle Bill’s place.”

“What in the Hell is it doing back there?”

“I drove it back there to see if see if that dead horse was stinkin’ yet.”

“Well, what in the Hell were you gonna’ do about it if it was?”

Not too long after this, Corwin and Kelvin were found to be growing a lucrative crop of marijuana on Daddy’s place. It was a good time for the family to leave.