The fallout from the birthday party continued when Mr. Awful got home and heard the sad saga of the missing birthday shoe.  Loss of a shoe was a weighty matter in that time.  Many families usually got shoes in the fall and perhaps a pair of sandals or tennis shoes in the summer to get kids through till serious shoe season in the fall.  I suspect this may have been true at the Awful’s as well, since he bellowed at the kids and put them to searching for the lost birthday shoe.

Naturally, they returned to the last place the shoe was seen, the pigpen adjoining our property. They truly searched for a few minutes, this time not harassing the pig family.  Before long, their inherent high spirits overcame them and they began sliding in the black mud and manure mixture created by the pigs.  They were so joyous in their search, we watched enviously, begging Mother to let us join in the fun.  Unreasonably, she refused, though she did join us in watching their fun.  They cavorted in the ever-increasing slime till the entire pig pen became one enormous excremental slide, spread universally over the entire lot, erasing all the hills and valleys the pigs had carefully constructed for their wallows.  From a running start, the kids could skid from one end to the other, spraying slop high on either side as they flew by us.  The squealing pigs fled from one end to the other as the slimy kids approached them.

I have never been more jealous.  Eventually, it occurred to Mr. Awful no one had returned with the missing shoe.  He was reunited with his filth-encrusted children and shrieked his disappointment to High Heaven.  “You kids better find that shoe or I’m gonna tear you up!”  To demonstrate his intent, he picked a wispy weed and smacked his own leg, demonstrating the beating they could expect.  I suspect those poor kids had never heard such a threat, since they set up a wail and started diving into the slop in earnest, eventually uncovering the filthy lost shoe near the feed troughs.  I couldn’t tell a lot of difference in the search and what they’d been doing before, except that they squalled all during the real search, as Mr. Awful periodically shouted threats and swatted his leg with the switch to terrify them back into action.  Altogether, it was a wonderful show.

The barnyard turned out to be just a bedraggled fence enclosing a chicken house with a row of nesting boxes.  The chicken house had seen better days and leaned crazily to the left.  Someone had thoughtfully propped it up enough so the eggs didn’t roll out of the boxes.  Jamey picked up a pencil-marked egg and slung it against the barn.  It exploded with a nauseating sulfurous smell and resounding pop, whereupon Jamey explained it had been left for the hen to “set on” and had rotted.  I was familiar with the concept of “setting hens” and knew not to touch precious eggs.  Mother had made it clear eggs were precious, not playthings.  Nonetheless, Jamey took an egg from another nest and hurled it.  It also exploded and turned the air to sulphur to the delight of the party-goers.  Kids started flinging eggs madly.  Knowing they were older and wiser, I joined in.  Before long we’d exhausted the supply and moved across the road to the pig pen.

My parents had frequently complained about the malodorous pig pen, but in a rural community, only consideration governs location of noxious livestock.   Conveniently for the Awfuls, a vacant house with an enclosed back lot stood between our place and theirs.  They had wisely appropriated the back lot for their pig pen.  It was much closer to our house than theirs, a wise decision on their part.  The small pen was home to a couple of sows, their extended families, and millions of flies. Due to their wise location of the pig lot, we undoubtedly got a lot more effect than they did.  My mother, in particular, was offended. Jamey, our fearless leader climbed on the rails.  The smaller of the sows and her babies fled, squealing.  The larger sow the size of a sofa, didn’t seem too disturbed from where she lounged in a muddy wallow across the pen.  The baby pigs were so appealing, we decided to catch one and pet it.  Jamey was a wonderful host.  He dropped into the pen in pursuit of a little pig, followed by me and a couple more kids.  My immediate attention was captured by the ripping of my dress where it caught on a fencepost, hanging me up from the top rail.  Sofa-pig didn’t take all this well.  She lunged at the kids with a guttural growl, running them back over the fence.  Fortunately, I was suspended above the action and climbed to safety, though my fancy dress was done for.  I wasn’t the only one who suffered damage to my wardrobe.  As Jamey sailed over the fence, the mama pig got one of his new birthday tennis shoes.  Mrs. Awful was not happy about that.

When we got back to the house and Mrs. Awful finished cursing about the lost birthday shoe, it was time to open the presents.  As I said, this was my first birthday party.  I was proud of the flashlight Mother had wrapped for me to bring to the party and couldn’t wait to get it back.  Mother showed up for coffee just as I learned I was expected to leave it for Jamey.  I wasn’t falling for that one.  I was wrestling with Jamey for possession of the flashlight just as she walked in the gate.  My behavior, coupled with the destroyed dress, put an end to the coffee-klatch.  Mother dragged me home bawling without the flashlight, my tattered dress tail dragging in the dirt, my first big social fail. 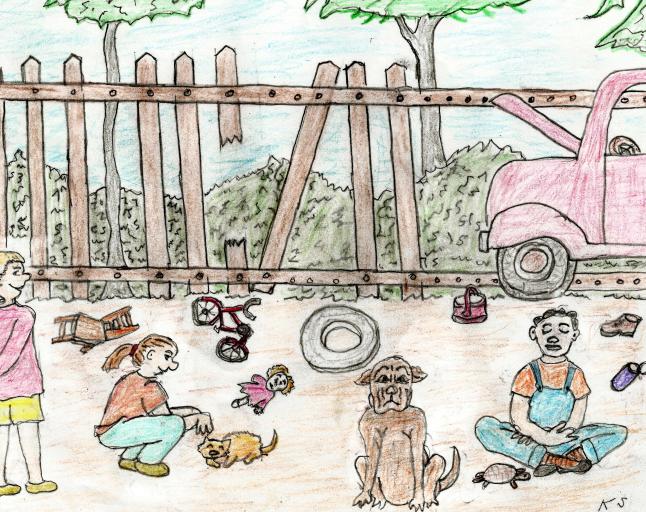 I entered the Land of Enchantment when I passed through that gate.  Shrubs had entangled and obliterated the tangled yard fence.  An amazement of possibilities greeted me.  Hounds and a few chickens lounged on the drooping porch.  A long-abandoned truck rested on blocks.  Old tires, stacks of lumber, pots and pans, and broken toys littered the dirt yard.  The hounds had dug dozens of holes, which the kids had expanded.  A few wild children were whooping with joy, slinging missiles of Chinaberries at each other.  I never wanted to leave.  Mrs. Awful disappeared into the house while we set about entertaining ourselves, a perfect system.

At four, I was not concerned about social order, so I made my way to the doorless truck, shoving a hound off the battered seat so I could drive, my first opportunity to get behind a wheel.  I stood behind that wheel, turning it madly, till I was shoved over by a late-comer.  I wasn’t particularly disturbed, I knew bigger kids got the first crack at stuff, so I didn’t waste time whining, just kept shoving till they moved on.  I did hurl a broken toy car as they ambled off, but they didn’t bother to come back after me.

All around me, unsupervised kids were running wild, screaming, shoving, running over smaller kids, and just having a wonderful time in general.  Fortunately, there was a wide age-range of kids, so I was able to get in on the fun.  Eventually, Mrs. Awful made it out with birthday cake, serving it up to us on napkins.  She didn’t linger long, quickly returning to her soap opera.  We heard the organ music pouring out the window.  For some reason, she left her toddler, Becky, among us as she returned to her soaps.

Unlike a couple of the little girls, I had no interest in playing Mama, particularly since Becky’s diaper appeared fully loaded.  I had a baby brother and grasped the significance of that drooping diaper.  Within minutes, Becky’s secret was out.  Kids ran screaming as she approached, like she was “It” in a mad game of chase.  Several tumbles in the dirt did little to clean her up.  Even though she was a baby, Becky understood and protested the shunning.  She stood bravely squalling in the midst of the melee.  Even that didn’t bring her mother to the rescue.  Jamey took mercy and turned the water hose on her, hoping to sanitize her and make her more socially acceptable as he stripped her of her diaper.  To the universal delight of the party-goers, his enterprising brother grabbed the hose sprayed the general crowd, including dogs and chickens.  Should you ever want to plan a good party, be sure to put a water hose first on your list?  We joyously ripped through the spray, fighting for control of the hose.  Our game was cut short by Mrs. Awful hurling curses at us.  If only we had not sprayed water on the television through the open window, our fun could have lasted longer.  She scooped naked Becky up and exiled us to the barnyard.  Fortunately, the barnyard was promising. 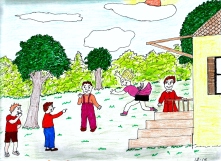 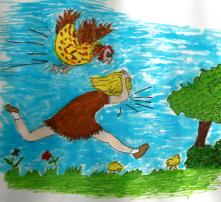 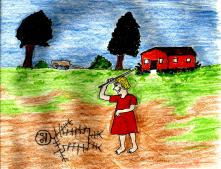 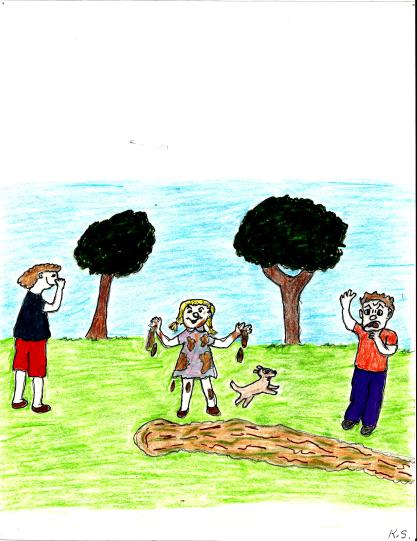 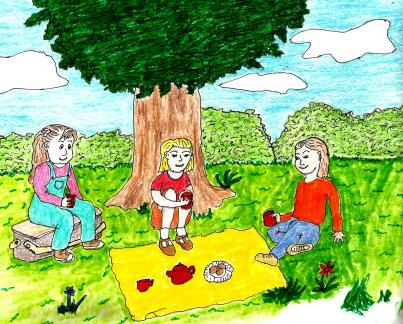 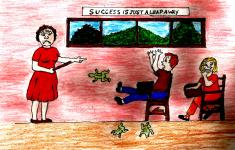 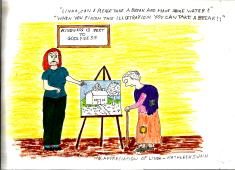